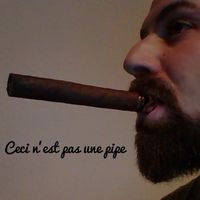 I'm a theatre writer and actor, but not even my parents come see my plays;
I have a physics master degree, but if you ask me how airplanes fly I guess they might be magic;
I'm full of stupid opinions which look wise because I have a pipe in my mouth;
I tell a lot of jokes but I'm the only one who laughs at them.

A couch, some wine, a good talk, a good not talk,