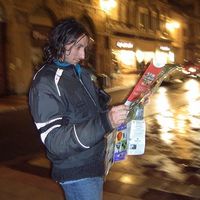 Living the amazing adventure of being father! Trying to be a good one!

Check my List of friends and my refs…
I also created the Torino Cs Local Group in 2006, I have been for a long while moderator of the group, sometimes I organize events of cultural/spiritual interests more rarely social gatherings, I was called to relate about CS to FEDEX in my city Torino in 2010 and some cinema students made a short-movie clip on my Cs experience!

Seriously too many to write.
Everything concerned with Nature, Universe and Mankind, absolut or relative...did I forget something?
Let's try to tell you what I mean but you should read below and it would take you some time....

I practised for 15 years JuTaiJutsu, 5 times a week for some years, and before when I was a child, Judo and Aikido for many years. I've been practising martial arts for more than 2/3 of my life.
So I had a connection with Oriental philosophies, but this word philosophy is something very western, that is connected with intellect and mind, while what I'm talking about is strikely more an approach, a mood, a way of feeling and of experiencing things and life. Since when I was a child, I've always had a "spiritual" , but I do dislike this word, approach to life and a strong sense of lack that made me in continous quest. And being very curious,having good intelligence and the luck of having the easy possibility of feeding me of culture,since childhood, then in adolescence, I passed trough mind and intellect and knowledge, being courious of everything. Sciences, from biological and natural to mathematical and phisical, (less interested in application and technologies), psychological and human sciences, like anthropology, and etnography, history in particuolar ancient history, religions, mythologies, arts and litterature, but also music and recent arts like cinema, and so on....I can say there's nothing I wasn't interested in because I felt all was connected and part of my quest. By the end of high school I realized that intellect was extremely limited, and so I still consider it and all which is connected with and you can do with. To me it is a sort of good tool with which you can solve problems , but more often it gives you hundred of problem because it works automatically even when it should stay off. It's something You can play with , but not something trough wich you can know and solve the quest, so I'm still very interested in everything but without expectation from this, as a plesure, as a game. In the mean time, I mean trough all my life I went on with other approaches, experiences for my quest. From martial arts the step was easy to what is called "oriental spirituality". And so I since I was young I was in contact even for "accidental" events to tantrayana buddhisism....
But my experiences where various; I have a group of friends with wich we worked a lot in the south american (tolteq)spiritual path (Castaneda, Victor Sanchez), I practised with a group of Gnostics, and many other groups (Yogananda, humanists, Art du chi (Vlady Stevanovich) and so on).
2005 and 2006 has been very rich years for what I lived. In a fertile moment I got in touch with the tantric shivait tradition and after few months, I "accidentaly" met the girl that has been my girlfriend for more than one year. Only afer some weeks we were hanging on togheter I discovered it was years she was on that path! So I knew her Guru, Daniel Odier, and after few months we both met Parvathi who's a yoghini with wich I feel a strong relationship, a disciple-guru relationship based on love. I joined her in India where I had my first long experience of opening of the heart. So many things happened since taht time but I cannot write about it, many experiences that changed me and are continuing to change me and my life. That's why I say It's a great time. After that, being back I felt Daniel became my guru and I still feel he is!

Ok what else then?
Since summer 2005 I decided to stop temporary with martial arts and I've been ....dancing. Check this out: https://www.facebook.com/jesus.mamaafrica
Afro dance.
I've alwasy loved dancing, my style is personal and various with elements from funky, brackdance, and spontaneous moviments who reminds traditional ones. (Warning!!! I need a lot of space to dance). I also practised capoeira with some constance for 2 years and in a discontinuos way in last years, but still today I take frequent classes in different groups when I can.

But in october 2005 I was at an afro concert/ballet. I found my first teacher there. I had 5 teachers here in Torino, sometimes all of them in a week, in my first years of dancing I had many periods in Paris where i had a full immersion 3 hours every day, and by my second year of dancing I also started studying afro percussions (Djembe orchestra). From that time I had a huge number of seminars with probably most of the best and most well known dancers and djembefola in the world. I got in love with Sabar dance and music too, and joined every year some afro festivals, at the beginning in Plouah, Bretagne, then in last 4 years MamaAfrica, where I have 8 to 9 hours of classes every day for 7 to11 days and we go on dancing or playing night timeÃÂ¢Ãâ¬ÃÂ¦. A real passion.

In recent years I also approached to some Swing, Lindy Hop dance, because swing in the end is Afro Dance on music from the 20s,30s, 40s..
and as couple dance its just wonderfulÃÂ¢Ãâ¬ÃÂ¦

...and with Tango, thanks to the beautiful people of a group of dancers and teachers spread all over the World , who share a special way to see Tango and gather in Incredible Events, every time in different nations and cities, called Tango Neta! TN!

Anyway since one year I also started back with Martial Arts too, but this time it's Win Chun! it's great!

Nature and sports connected with. Trekking, skiing , rock climbing (I'm not well trained as I was 10 years ago but still I can climb most 6A at first attempt...).

Travelling; since I was a child my parents took me in many trips and when I could started on my own.See where I've been but those are only the places where I've been in my adult life, when I could decide on my own. As I child I visited Scandinavian countries, Netherlands, what it was called Yugoslavia twice before and Czechoslovakia the year right after the fall of the communist regime and so on..

I'm a biker, I mean a motorbike rider. I discovered this new universe not so long ago, it was 2002 but since that moment I didn't stop using my bike even in wintertime with cold, rain, snow and hail! I use my bike as veichole here in Tourin for everyday life, like going to work, even when I go visiting patients at home, or for short trips on weekends (it's full of wonderful roads, in particoular the ones to the mountains or to the seaside or to the countryside) or for long trips. For example in 2003 I went to Spain passing trough the Pyrenees from Pau to Jaca then Trough Aragon and ; in summer 2005 I descended from torino to the very bottom of Italy, Puglia than Calabria stopping in many regions to visit friends all around the Country; in winter 2007 , last days of frebruary, beginning of march I left with Ady to Paris, under terrible atmospherical condition, overloaded: but we had an incredible trip visiting wonderful places and cities on the way, crossing a unforgettable scenarios, off course travelling only on little regional roads except for moments of high danger. It took us one week but it was amzing; under snow for 50 kms from the french side of frejus to Chambery, and strong rain and terrible wind for the largest part of the rest, with two terrible moments of hail one of wich in night time on a little contorted road to Beaune. Despite all this we visited Savoy, Lyon and its land, BeauJolais, Bourgonne, Aube and Yonne before arriving...
Summer 2006 little trip in the Noth of Sardinia...definetly a place to visit by bike...
Ah my little "mule" was a 1992 green Honda Transalp!!! I have to thank her and now she needs a little bit of upkeep before leaving for the next trip!!!
In 2008 I changed her for a little-bit younger 1997 red Honda Transalp.
We crossed Peloponneso and Attica in Greece, survived Athens'traffic
(very quiet in August by the way) and reached Leros Isle a beautiful paradise in DodecanesoÃÂ¢Ãâ¬ÃÂ¦not many other big trips in recent years (well, crossed many time France again) but a permanent daily relationship at any season, even under rain in cold winter timeÃÂ¢Ãâ¬ÃÂ¦.

And of course, I'm a doctor so I'm stongly interested
in Medicine but for my "other" interests since I was young I started studying traditional medicines too. I work in the 118 Emergency Service as a Doctor on Ambulance. I have recently been captured by the deepness and beauty of Ayurveda. I hope to enter more and more deeply in it!