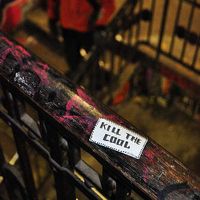 Enjoying life as a dad.

I'm a little man full of energy and always up for anything!
I love travelling, hitchhiking, meeting people, sharing experiences, cooking... I'm slightly hippy (well my friends say so).

I'm open to any opportunity that life offers to me.

I love juggling, unicycling, theatre, partying, random conversations, watching the stars in the middle of the night, bare footing.

Recently became dad and spending a lot of time with my baby boy who grows so quickly. NO!! don't go away, he is an angel! Really! I promise he will not get in your way, he will not cry, he will not have tantrums... well not quite...

Having a baby did not make me stop couchsurfing, I will however expect (even before but even more so now) that you have filled in your profile and taken the time to read mine as well as writing personalise request.
I know some bits will be pasted but that's fine, the reason you do the trip will not change from one surfer to an other but why you contacted me (or us) matters to me.

I started to read with "The Hitch Hicker's Guide to the Galaxy" and I really appreciated it. I would like to spend more time reading but it's not the first thing I would do when I have some time to kill.

&gt; I hugged and jump on a scotish drunk guy met randomly in the street in Edinburgh.
&gt; Balance a chair on my chin to win a game of the Warewolves of Thiercellieux.
&gt; I got plastered at 6 years old the day after a wedding in Perigord (France)(it was an accident!!).
&gt; I sharpenned my auricular when I was 5.
&gt; I got kick out of a kebab shop at 3 in the morning because I was balancing of their stool on my chin..

Could teach you French, Computing, juggling, fire-breathing, snowboarding, skiing, how to convert a decimal number in a hexadecimal number !
Would love to learn spanish (I've already started but i'm not doing great at the moment)