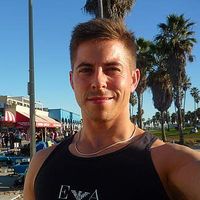 To explore the world and when there is no time for that, to let the world come to me.
Some people collect stamps or coins, but I collect friends from around the world. :-)

I am a very energetic and usually glad person. I enjoy meeting new people and seeing other cultures.

There is always a reason to be thankful!

FRIEND REQUESTS
I only accept friend requests from people I have met in person, so please send me a message instead if you want to get in contact.

I prefer staying with locals as opposed to staying at a hotel. This is how you really get to know a country.

You could say that I have done couchsurfing long before I became a member of this site. I have stayed with many different types of people in America, England, Germany, India and Fiji before CS.
Now I host quite often and I also love to surf other people’s homes. I often stay in contact with my new CS friends and have met up with many of them more than once.

Sometimes I use CS when I travel with my music buddy, the singer Reg Downey. We often have concerts abroad.

Most of my spare time is spent at the piano, so I don't read as many books or watch as many movies as I would like to...

Driving around in Bangalore as the fifth person on ONE scooter!

I have visited the secret and radioactive site for nuclear bomb testing in the American Nevada desert, where almost 1000 bombs have been detonated between the 50’s and the 90’s.

Hitchhiked from my home in Denmark to a CS friend’s home in Austria in 26 hours.

Being in St. Petersburg experiencing the 60 year anniversary day of Russia’s victory over Germany with the biggest military parade I have ever seen. Millions of people were on the streets and the firework show was out of this world.

Always be adventurous!- Ninety percent of people in this world are probably friendly. - But a portion of healthy skepticism is good too.

I can teach you some piano tricks.
I like cooking for/with my guests.
If you come at the right time of the year we can harvest some of my fresh vegetables from my kitchen garden for cooking.