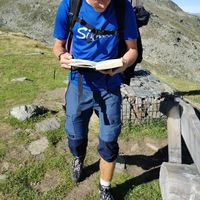 I´m an upper bavarian boy, who loves to learn about other cultures. I guess I´m a bit of a loner, but I can also be very social with the right crowd. Also people say that I can be a very fun person to be around :-)

I find history, geographie, languages, cultures and stuff like that very interresting.
I like meeting meeting warm hearted people from all over the world and learn about other cultures.

I listen to alot of music from all genres.. mostly rap and electro from the 90s and old Pop and Rock music from the 60s, 70s and 80s.. Everything from the Beatles over Simon &amp; Garfunkel to Wu-Tang clan

There´s not enough space in here for all the amazing things i´ve seen and done ;)

But from the top of my head:

I travelled across the United States for one and a half year, living with people I worked for in exchange for Food and lodge.

Travelling from Chicago to Oklahoma city over the historic "route 66" with a 125cc moped. unfortunately it broke down in Oklahoma city so I had to take the rest of the way to Los Angeles by bus.

Relaxing in the death sea.

Seeing great reefs when I was scuba diving in the red sea (Hurghada, Sharm-el-sheik)

Flying over grand canyon in a heli

going snowboarding on all the mountains nearby my home in Bavaria.

living in every borough of NYC except the Bronx for at least two weeks.
living in NYC for a half year.

Partying with two members of the Wu-tang clan (raekwon &amp; Ghostface Killah) in a club in Manhattan.

Living and working on an "urban farm" in Chicago, with 12 goats in the garage, who made me laugh every day.

Living in Albuquerque at an adobe style mansion for 6 weeks.

Living in Munich for one year, right across the street from the ground where Octoberfest is happening every year.

I love to learn things I´ve never done before or see other lifestyles.