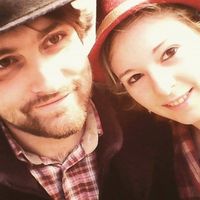 To learn and to grow, to find out what we want to do with our lives and where we want to live. But that’s quite broad! To begin with, Alexis’ mission is probably to finish his master in statistics while working and to learn how to make and develop good photos, and Florence’s mission is to find a good work/life balance allowing her to create, and to develop her writing &amp; pottery skills... ah, and to become fluent in Mandarin too!

We are living and working in Brussels, Alexis in a little start-up working on linguistic data analysis, and Florence at the European Cyclists’ Federation, developing a network of cycling routes across Europe (EuroVelo).

We are not very often traveling together anymore, but as we have shared this CS profile since 2011, we have decided to keep it this way!

If we host you in Brussels, we can go together to one of the many concerts and other events happening every night in this city :)

In 2017-2018 we did a long journey that we had been dreaming about for a long time, namely traveling through Russia with the Transsiberian and wandering in China and Taiwan to see tea places. It was a very beautiful and instructive journey, even though getting around in China can be quite hard ! But there are still so many places we want to visit in these countries. We'd like to hike around Baïkal lake, to spend a week in the Wuyi mountains where we haven't had the time to go, to explore Tibet on a motorcycle, to walk in the tea plantations of Xishuangbanna... The list never stops and always refills itself.

The year before we were living in Vilnius, Lithuania. It's an amazing town and we were quite heartbroken to leave after only a year, but we were called by other adventures. We fell in love with this town and its romantic streets, its hidden cafés and bars, its magical language... In the future there are other places where we'd like to live. Maybe Georgia or Armenia, to discover this interesting and beautiful region. Costa-Rica, to learn about ecology and nature. Russia (Kazan, Sint-Petersburg, Irkoutsk...) because Alexis has been fascinated by this country for a long time (despite Putin...) and there is much to explore there.

In a distant and blurry future, we envision to find a little spot for ourselves in a Finnish forest, where we could build or renovate a house near a lake. There are lakes everywhere in the eastern part of Finland. We'd have many trees, some flowers, some food growing there, and of course a wonderful tearoom in the nature. We'd live there among several cats and dogs (but more cats), write and make ceramics. We’d look at aurora borealis during the winter and in the summer, there'd be almost no night ! Maybe that's where we'll go when we get older... And if we can paint our house in the turquoise color of the Ermitage museum, have a dragon in the lake and some old magic books in the attic, that’d be even better.

Last year we have surfed a lot while traveling. And when we were studying, we hosted many people in our student apartment in Louvain-la-Neuve.

We have been living in Brussels since May 2018, but we didn’t have the possibility to host so far - we were living in an old basement that we partly renovated, and it was really not fit, or big enough, for guests! But in the future we hope to find a place where we can really host people :)

The first time we surfed was in Turin and it was really nice because our hosts were both very kind and interesting. They were Ukrainian people living in Italy, and they served us really good white Gewurshtraminner (no idea how to write this) ! Since then, we surfed in many different cities, and we were often amazed at the kindness of people.

We have also hosted a lot, especially when we were living with friends in a student apartment in Louvain-la-Neuve because there was a lot of space and our friends were often taking care of our guests too, and in Vilnius because we had a spacious apartment. In Louvain-la-Neuve we could take our guests to parties and make them taste famous Belgian beers; that was a lot of fun. In Vilnius, we spent New Year with couchsurfers, making it more special as our friends from home weren't there :)

We met many great people. Sometimes we really connect with our hosts/guests and sometimes not so much, but we never had a bad experience with someone. We're especially thankful to our host in Iaroslavl who drove us all around the city and was the perfect tour guide for two days - we learned a lot thanks to her ! And in Sint-Peteresburg, we were hosted last winter by a girl that we had met through Couchsurfing 4 years ago. It was the summer and we had drinken wine on the roofs of Sint-Petersburg... It was great to see her again after so much time, and in snowy Sint-Petersburg. Crazy and unexpected things happen when you use Couchsurfing !

We are both passionated by travels, tea, good books, good movies, good music (jazz, some rock or electro or any amazing music). Florence has been learning Chinese for a few years and Alexis Russian, but he's going to start Finnish classes soon to get prepared for our future place in the forest over there!

We're also interested in a lot of subjects: relations between languages, ancient languages, philosophy, playing music when we can (piano for Florence and organ for Alexis, and we'd like to learn how to play the saxophone and the clarinet), photography, sailing, magic, nature, hiking and cycling, radio, bees... We can also easily get interested in new subjects if we meet some passionate people !

Among our many dreams, there is writing novels and opening a teashop where there'd be lots of books for people to read and art everywhere. Or becoming a mad scientist in a tower of the castle in which we would live and building time machines or other useful stuff. Or becoming a witch and making weird potions and chanting ancient songs in the forest at night (but that goes quite well with the tea shop).
Maybe we should add that this last sections concernes more Florence than Alexis :)

These are among the best for us (not following any order):

Philosophers (Florence): Heidegger, Patocka, Sartre (phenomenology is cool !), Bergson, Aristotle, Putnam... Also oriental philosophy (I wrote my master thesis about Cha No Yu, the tea ceremony in Japan, which enabled me to understand some very interesting stuff about Taoism, Confucianism, Zen and Shinto :))

Hiking through Lithuania, Latvia and Estonia in October-November 2017, sleeping in the tent with temperatures getting as low as -2°C. One day we walked 35km, a good part of it in the dark because it took us more time than expected to get out of a very messy forest! In Estonia, we met a ranger who let us stay for free at the firemen's station - great memory!

Taking the Transsiberian from Saint-Petersburg to Vladivostok in 3rd class, stopping to visit some fascinating cities along the way (Iaroslavl, Yekaterinbourg, Kazan, Novossibirsk, Irkoutsk and of course the Baïkal lake). Spending Christmas at the Baïkal lake! Watching the sunrise in Olkhon island by -30°C, on an ancient shamans' land...

Crossing the Russian-Chinese border at a border checkpoint near Vladivostok and being abandoned by the bus, which resulted in paying our first Chinese taxi far too much. Visiting Litang, a small tibetan town in Tibetan Sichuan, situated at an altitude of 4000m - and experiencing altitude sickness in a guesthouse without water because it had frozen... In Yunnan province, buying pu-erh tea from tea mountains we had visited.

Taking the ferry to Matsu, a small island belonging to Taiwan, and getting stuck there for a week, all boats having been canceled because of bad weather... And doing some wwoofing in Taiwan, in a natural tea garden in the mountains!

We know a lot about different teas, as this subject interests us a lot. We love talking about the colors of tea, the different ways to make it, the agricutlture of tea etc, so we'd be happy to share our knowledge (even if it is far from perfect) with you if you are interested.

We can teach you some words of Lithuanian. It's a very beautiful language. And we can show you a great video about the history of Lithuania!

Florence can tell you all about EuroVelo, the European cycle route network, and give you useful tips to plan cycle holidays around Europe, and also teach you some Chinese words. Alexis can tell you about hieroglyphics, birds, plants and much more - he tends to have quite an extensive knowledge on various (seemingly random) topics!

We can also give you advice on planning a journey with the Transsiberian through Russia!

We can make tea for you. Lots of tea! Alternatively (and depending on how we travel!), we can bring you some great Belgian beers.

And we can have deep conversations about life, the universe and everything :)