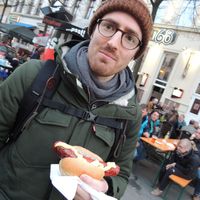 Fellow couchsurfing humans, I salute you!

I'm François, I'm European, I'm 28 years old. I just got back to Brussels after having lived in Berlin for a year. I've been working as a freelance journalist for the past three years, but now I'm looking for a change. We'll see how that works out...

I should probably say that I don't travel alone any more. So when I'm couchsurfing, it's almost always with my girlfriend and sidekick Djoïa, who has been kind enough to endure my bad jokes for almost five years now.

In general, I'm curious about anything, I like asking questions and listening to people's stories. I like cooking, reading, playing music, running, walking, hanging out with friends...

... because it's the only real way to travel! There's nothing like meeting locals to discover an unknown place and its hidden spots.

Over the past years, I've been couchsurfing in Europe, in North America and in Japan. I would really like to start hosting more people myself, to give back to the community. So as soon as I've found a bigger place to live, I'll be happy to welcome you and show you around in Brussels!

I listen to all sorts of music, watch all sorts of music and read all sorts of books, as long as they're not commercial shit. Musically, I've been through various phases over the years; from grindcore to indie folk, via low-fi, reggae and electronica. Cat Power and John Frusciante (the early stuff) are my all-time favourites. And I've been listening to a lot of Patrick Watson recently. Apart from that, I'm mostly into independent cinema and I like reading novels, mostly classics. I really love Paul Auster's work (especially "Oracle Night" and "Leviathan") and I warmly recommend reading Vladimir Nabokov's "Despair", which is simply brilliant.

Thanks to my good friend Basile, I got to drive Cat Power to the airport after her show in Brussels. That was pretty amazing...

It might sound weird, but I'm a certified compost-master. I can offer you guidance on how to start and manage a compost heap!

If you come to Brussels, I can show you around, take you to cool bars and make you discover the "other" Brussels, the Brussels beyond the Grand Place, Manneke Pis and Delirium...