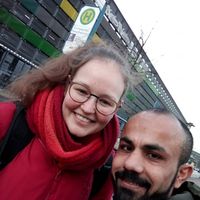 I am honest. I think that´s good, but I also can´t lie. Sometimes it might be more useful or fun to lie, but my ability to lie is in fact very limited.
I don´t smoke, I don´t drink. I enjoy good conservations (serious or just fun), meeting people and dancing. I dance Forró and in a group with people with disabilities (I don´t have an official disability, except glasses). I like to be with both groups because they are open-minded, friendly and somehow special in their ways.

languages ( I know German, Spanish- basics), I´d like to learn some words in any language.

stories, experiences
Dancing (basic steps, I am far from professional)