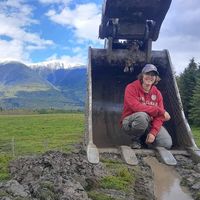 !! Important Notice !!
I have a high risk person living with me so I am currently unable to host unvaccinated Surfers. Thank you for understanding!

I'm an optimistic, open-minded person who likes travelling and being in good company. I have a completed apprenticeship in IT, spend a year on a Hungarian Campsite with horses and another work &amp; travelling around Canada, but I am interested in many other subjects, too. I love a good discussion!

I love travelling, but I don't like seeing places only from the touristic side - seeing it from a local's point is a lot more interesting and a great experience to actually get in touch with the culture.

I saw a Total Solar Eclipse in the middle of the Wyoming Grassland.

I went to Prague for a Metal Concert.

I went canyoning and paragliding in the Austrian Alps.

I saw the full moon on a snowy, starry night on the Säntis in Switzerland.

I climbed into caves that are not accessible to the public.

I fought with my sword in the ruins of a castle.

I saw The Phantom of the Opera on New York's Broadway.

I took part in the European Solidarity Corps and spent a year abroad in Hungary.

I love good conversations in various topics and am curious to try out as much as I can - so if you propose something or have a crazy idea, I will most likely say yes to giving it a go.
I also like sharing stories of my own experiences and travels and it's very hard to find me in a bad mood.