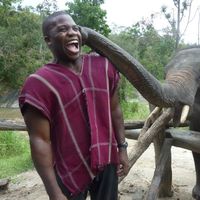 The more I meet people from other countries or my hometown Paris,France, the more I understand.

I love travelling. I've been already many times in Mexico, US and eastern europe. I figured out as well that great people are everywhere ( in Paris or in São Paulo) just need to recognize them when you see them.

We're all the same with our differences. My philosophy is to be humble and try to understand other human beings. I think that by being closer of each other by understanding other cultures, speaking several languages we can bridge the gap between us without forgetting our particularities.

I'm fond of trip. So far I've been twice in Mexico, I went to Morelia in the state of Michoacan, I've been also in DF, Guadalajara, Aguascalientes, Fresnillo, Zacatecas, Guanajuato (Qué bonito es), Zacatecas y Acapulco.

When I have been to Mexico once, and a woman I had never met before, invited me to her family’s home if I come back the next year. Eventually I did come back and she hosted me with her child and mum! Amazing, it was not with CS but as a human experience, for me as parisian guy it would have been impossible to do that, but thank to her I wish I could do the same at least one time...