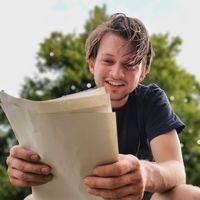 Hi,
I'm Frithjof. And I'm in Love. I love movies and the theatre. My passion is doing acting.
I'm courious about everything that affects the human, his nature and his culture. I do write.
I love beeing a host. I love to give. It's easier to give than to take for me.
That's it for the beginning.
Hope you'll enjoyed to find out the rest about me.

It's cool to travel, to educate yourself about this planet and also I can't afford hotelrooms. I like to be with people and like to learn new stuff

I did lots of plays especially for kids. Over the years I had been Onno the Eastfriese in the prestory of Störtebeker, the Ghost called Hugo in the prestory of the Zauberlehrling and Emil the mainrule in a play based on the story of Erich Kästners roman Emil and the detectives. I had also been in some advertising. Once, In a spot I had been drunk all the time, and I had to drink even more. It had to have so much that I die, in another I ask People to get help. What a funny coherence.

I'm a very open and interested guy. I would love to talk and love to listen. I love this kind of conversations that are the birth place of ideas.
I'm very open to everything new and even more the everything that's dofferent. I'm always hungry for knowledge. Soo, don't know.