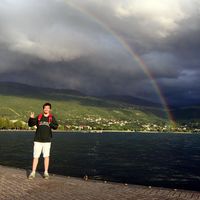 I'm a curious and easy-going person who is looking to meet new people to have a good time with :)

What I love the most about travelling is not being in cool places to just take a picture of them, but rather for meeting amazing people on my path, who can be anybody leaving aside prejudices, that's probably one of the reasons why I like hitchhiking so much.

Have a many-sided character, I'm always keen on good discussions about basically anything (environment, philosophy, cultures, wine, languages... you name it), I genuinely think that everyone has something to offer and am also keen on partying like there's no tomorrow! It just depends on the vibe, I'm quite flexible in that regard.

Even though I come from a pretty normal family with no international background, I see myself as a melting-pot type of guy, since I've started travelling a long time ago, and I do it as soon as I've got some free time, plus I've lived in lots of places and I've been living in France for the past three years.

I don’t like it when people have only references from just one gender on their profile, it puzzles me.

To get to know about you, plus I'm working on being a better person every day but I can't do it alone, will you help me? (it's just a rhetorical question)

I've got a weird fascination with islands

I love things the "old way"

Things I like the most (not necessarily in order):
People and culture
Languages
History and politics
Gastronomy and oenology
Hiking, tennis and skate.

I love almost all music genres from classical music to reggaeton, it really depends on my mood! Although I'd say indie rock is the one I listen to most of the time.

I'm not so much into films, but here are some that I liked the most:
Into the Wild
Limitless
Good Will Hunting
21 Blackjack

As for series Sons of Anarchy ranks first by far!

Hitchhiked from the most northern point of Chile to my hometown in 24 hours in order to get back to uni.

And many many many things that I can't remember right now

A few beers and a chat