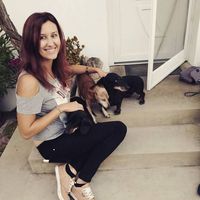 I love cheese and big dogs.

Like generally the people on CS, I like traveling, meeting new people, trying new things. Oh, and I love eating. It's just the best drug ever. I love learning languages, I have a long list of languages I'd like to learn (and probably this list is too long), but I'll keep trying.

(oh, and one more thing, I like wasting my time with games like Word of Warcraft or Skyrim, I'm working on this problem, but it is just soo good.)

Also, I have a longboard and one day I will be able to ride it like a pro.

I love the way CS makes the world smaller, it is just so great to meet open-minded people, who thinks similarly like you do. Also, biggest excuse for traveling is the financial part, and here is CS: it is for free and you get much nicer experience than going to a hotel.

I did Free Hugs many years ago in Győr. Awesome.
I grew up readig Harry Potter. I was waiting for my letter from Hogwarts which never came, but finally I went to Orlando and attended the closest thing to being a wizard. ^^
In 2016, I went to Hawaii and visited the most beutiful place on the Earth: it was Waipio Valley with it's gorgeous black sand beach, where the curious horses just come to say hi to you :)
I learnt to speak Polish.

And I gained the most amazing friends on the planet.