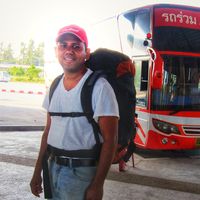 Backpacker, Vegetarian and aspiring vegan, YouTuber to raise awareness and money for charity. I am a Canadian living in Toronto, was born and raised in India. Started backpacking at 38 and loved it. I am involved in many social causes from seed saving to meatless lifestyle. I love Yoga and Meditation. GiveInKind.blogspot.ca is my charity initiative where we raise money for charity using online activities without asking anyone for cash donation.

Like Brook Silva-Braga noted in 'A map for Saturday', backpacking solo is not about the places, because the people are the places. You don't have to be in Laos or KhaoSan Road to have a good time. You just need those fine people and they are right here in your hometown. I am here to make friends , share and learn.

A Map for Saturday, The Best Exotic Marigold Hotel, Castaway, As good as it gets

I organize cooking class to raise money for food banks. As Indian Vegetarian I have 20+ years of cooking Vegan deliciousness. I would love to learn recipes from around the world, what better place to do it than in Canada?

Beer and lots of talk about travel. I can cook and share some simple vegan recipes.