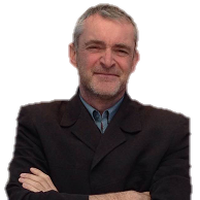 To not be tempted to settle down

I have travelled quite a bit and know enough to always want to know more about everything. Very interested in people and countries. I enjoy a good conversation/debate with people from different parts of the world and getting their point of view. I am a bit political (especially in my writing) Quite left-wing in my beliefs. Generally happy, positive person.

I like my guests to feel very relaxed in my house.

I've lived in Rabat for over six years, so I know how the city works and can help you navigate and get the best from your stay in the city.
Rabat doesn't offer much for the tourist after one day, but it's a great place to chill on your way to somewhere else.

Do whatever you want, but don't hurt anyone.
A personal quotes: 'A million people can be wrong'.

I host people and I LOVE it! Its great to learn about their lives, countries and points of view. I get them to sign my toilet door, which has quite a few signatures on it now from people all over the world.

Hosted over 40 people and enjoyed every single minute of everyone's stay. As a result, I have made some great friends from different parts of the world. I used to host in the UK, but now I have an apartment on the ocean front in Rabat, Morocco.

Cinema, Politics, writing, News, Anything South American/Spanish or to do with Syria. I love cooking and driving.

I run my own English language school. I make videos for YouTube and I write.

Almost bombed in Syria
Rowed a boat in the Amazon
Served drinks to the Prince of Norway.
Almost got slashed with a sword in San Pedro de Sula
Started a transport campaign in London.
Thew stones at a crocodile.
Nearly died on an island off Honduras.
Got stabbed in Marrakech.
Man, if I tell you them all in this little box, I'll have nothing to talk about when you're here.

I am very good at English (being a writer) so could give you a help in that field. I know a fair bit about Rabat and how to not get ripped off.

I am always up for learning bits of languages and facts about countries and the people in them.