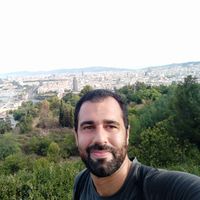 Traveling as much as posible and open my mind

I consider myself fun, grateful and sociable person, sometimes a bit shy... but I usually try to do my best in order to get Know people through a good conversation and if it´s with coffe or beer much better haha I´m happy with little things and enjoy a lot in a good company.

I like meeting new people and doing varied activities like sports go to events in general , as and of course , go sightseeing .

Mainly participating in activities of my city Granada and in London , and now Lisbon ... I ´ve also been hosted by couchsurfers ... and in general the experiences has been very positive.
In CS the cultural differences are much less than I thought before join in the website... in other words .. no barriers

Meeting people in Granada and tourists who visit the city and apart of that I was hosted in Paris, Amsterdam , the basque country and United States with great memories of each one

going out with my friends, playing sports and watching it on TV , such as football, tennis, basketball, cycling, hiking ... listening to varied music (rock, blues,alternative...) , and social or drama movies

I like the social-themed films, dramas, historical and comedy
ex. the life is beautiful , Forrest Gump, good bye Lenin ...
and the pop rock,blues,soundtracks, alternative music as U2,Bruce Springsteen,Eric Clapton ...

I´d like to meet people who is happy with their activities or ocupations and who you can learn something about them, it doesn´t matter the topic.