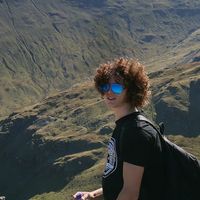 Hi there! I'll be in Gdansk and Warsaw for a few days and would love to meet up with fellow travellers (maybe for a cheeky beer or two!)

Learning the Russian language - on my 7th novel.
Homebrewed at least 20 beers over lockdown.
Been drumming to metal music for 11 years - got a few gigs lined up.

Played drums so loud that security told me to shut up.

Tidy, respectful, a few beers in return for your hospitality.