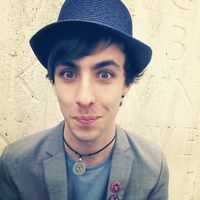 I’m a music journalist and write for a few places. I’ve also started writing book reviews for a newspaper. I’m a spoken word artist because I generally talk nonsense – so it suits me. I like cycling. I also enjoy calligraphy and just realised all this info could probably be going into my ‘Interests’ section.

My interests lay primarily in music. Though I am a wee book nerd and love poetry too. There are a few bands and authors and poets that I’m so obsessed with I could probably count them as interests.
Bands: Anathema, The Cure, Bat for Lashes, Type O Negative, Joy Division.
Authors: Haruki Murakami, Hermann Hesse, Franz Kafka, Jon Ronson (although he’s a journalist really).
Poets: W.B. Yeats, ee cummings, T.S. Eliot and I’m just going to stop here to ask why all three of these use just first initials?

I'm a bit of a nerd on the music and books front, so I'd be lying if I gave a genre and said 'I like that' because there's definitely something in it I don't like.

I don't know many movies! But I tend to like movies with Kevin Spacey. The Life of David Gale is one of the best I've seen.

Bungee jumped? But a lot of people have. I've zip-lined over a forest top on a mountain in Northern Ireland too. But I preferred the bungee jump.

Here's where I put in some quote to sound like I'm full of wisdom when I'm not.

My general idiocies. I vow to pretend I can speak Irish and make up words for you to repeat to your friends, making you sound cool and cultured when really, you’ll just be mumbling rubbish.