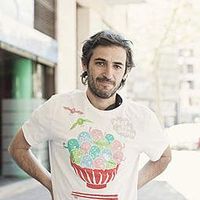 I started mi participation traveling around Europe with the CS Project, and now I participate hosting people in my own place in Barcelona.... All my experiences with CS were great, all of it!!!!! I traveled last summer all across Europe only with CS Experience, and I must say that it changed my head, I returned to my old ideas about "believe in good people somewhere in the world"......

...music, free time, more music... I prefer people with long hair than people with short hair. I prefer poets than lawyers. I prefer musicians than doctors. I prefer dreamers than ..... I don't know the word in english. Anyway, I have a lot of friends with short hair, I have some lawyers friends, and my ex girlfriend is a doctor, so, I think I'm a little bit crazy. I like people, all of them, I think that everybody have a good story to tell me (sometimes I am wrong with this and I spend time with very boring people, but I can say that I make the try)...

I used to be a reader when I was younger, now I'm lazy (the Internet is guilty on this item...)