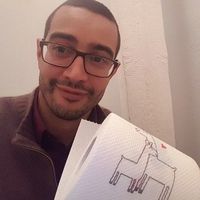 work work work... yes I know, that sounds weird for a mission..

bonjour je suis un pingouin !!!
( and I should never allow my little sister to add stupid things on my "profile" ;) )

I consider essential to meet people coming from different backgrounds to open your mind.

I'm convinced you can exchange something with almost everyone, if there is communication. Many people are afraid of others, and that's a pity..

If you come to Strasbourg, don't hesitate to call me for if you need advice, assistance, emergency couch, party partner or anything else...

Don't use it for sending me messages for standard couchrequests.. there's a form for that !

I hosted some people. I was hosted. I surfed with CS friends I had or I met on the way. I had amazing experiences with people I just knew, with an incredible feeling of brotherhood. I also had less good experiences, people not really in the good frame of mind, just looking for free hosting and that didn't realize that you also have to give when you want to receive.

I would like to quote a guy I met at a party :

"Sometimes couchsurfing rocks. Sometimes it sucks. I like when it rocks, so I keep doing it."

Well, even if he was disguised as a texan cowboy, I must admit that I share his point of view.. ;)

music. I play the guitar, the bass guitar, I have an old organ in my house and various instruments so if you play music, come for a jam session !

salsa : I've started to dance a few years ago, this music is very energizing :)

I also like food and good wine, and going out of course ! concerts, theatre, shows.. parties..

movies : not so much.. South Park rules !

I once was alone for Xmas, and I went to the city to have a walk. I met Mehdi, a guy I knew with an other guy that was carrying a guitar and an harmonica. We had a talk, the fact that Christmas is a day for giving came out in the chat. The other guy was homeless. He offered to play music for Mehdi and I. We accepted, chose the harmonica, and he played. It was very nice, we clapped and he played something on his guitar. Then Mehdi said that I was a good guitare player and that I should play. He wanted to play something first, went on and I took the guitar aferwards. I started to play, "l'auvergnat", by Georges Brassens, a song about homeless people and the guy was really touched by the music. So I played another one, and another one, and another one, until my fingers were so cold I couldn't feel them. People were passing in the street, some gave money. At the end, before we left, Mehdi took off a pullover he had and gave it to the guy. It is the best gift I have ever seen given to someone at Christmas so far.

I can give tips for guitar and maths.. but who wants to play the guitar ?