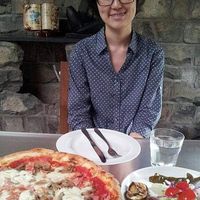 - I only host female solo travelers or people who previously hosted me.
- Now I have WiFi in my apartment. Haha

I was interested in foreign culture from when I was a little kid. I read lots of comics, manga and books about anything Japan. I admired Japanese culture so much that I started to study Japanese by myself when I was 5~6 grade. Surely Japanese culture consist a big part of me.
I didn't like English when I was a kid. Part because it was too mainstream and part because it was what Korean society forced kids to learn. But I enjoyed listening to AFKN. Got to learn so many amazing songs thanks to AFKN...
After entering college, I'd got my first chance to speak to Japanese, American and Chinese . And those chances impressed me to learn languages in a more practical way, and start learning a new language: Chinese. My first Chinese friend introduced me so many awesome stuff about China(mainly movies) so it felt so natural for me to start learning Chinese then.
During my second trip to Beijing I used Couchsurfing for the first time. It was amazing but honestly I was not a good Couchsurfer then. My schedule was too tight and I couldn't really hang out with my host. He seemed ok about it but still :/ After coming back home, I thought I also wanted to contribute this community and that's how I started hosting people.
I had hosted female solo travelers for 2~3 years and I really enjoyed commucating with people from different culture and background.
In march 2016 I quit my job and moved to Taipei to learn Chinese seriously. I had spent 8 months in Taipei, 5 weeks in Beijing, and 1 month in Tokyo half learning languages and half exploring the area.
Now I'm back in Seoul and I would be more than glad to once again start hosting Couchsurfers. Welcome to my place =)