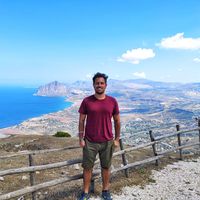 [IMPORTANT: generally, I am in Sicily during the second half of December or August/September, during the other months I travel non-stop around the world so I CAN NOT host]

CURRENT MISSION
Explore the world... there is still a lot to do! I have visited 56 countries so far and I dream to see them all, one day.

-I am a geologist but my life took an unexpected turn and now I am a "travel deals hunter/ content editor" working remotely for Travel Deals Websites. This became a big advantage as I can live the "digital nomad lifestyle" jumping from one place to another around the world!

- During the period 2017-2019 I have lived in a "more or less stable way" in: Thailand, Singapore, Indonesia, Netherlands, Canada, Spain, Chile, Poland, Mexico and jumped in many more countries like Romania, Ukraine, Hungary, Peru, Bolivia, Chile, Poland, Portugal, Spain, Greece, Turkey and Japan!

I consider myself an easy going, positive and full of energy person!

University's life was a bit strict for me so when i could, from 20 to 25 years old, i booked a plane ticket and ran away. I really really love to travel, I hate monotony; this is the main reason why I decided to spend one Erasmus year in Portugal in 2011-12, experience that opened my eyes

Every moment is the right one to visit new cities, meeting people, making new experiences, have fun and relax in new places, living the life!

To find out more about me and my travels https://www.instagram.com/digitalbackpacker/

PHILOSOPHY
If you wanna do something, do it! Don't care about other people's opinions. The best advice that you could receive is the one from your own mind.

After the experience, I like to keep in touch and, if possible, meet again. During summer I could help people who want to visit Sicily (and love to do it) and offer them an accommodation.

I lived in Coimbra (Portugal) and our amazing Erasmus house was opened to couchsurfers!

- I met a couchsurfer in Saint Petersburg who helped me, before going there, giving me many suggestions!
- I hosted people in my houses in Palermo and Gela ( Sicily)
- I was hosted for my first time on February 2012, in Paris.
- I hosted many times in Coimbra, in our vibrant Erasmus shared house (2012)
- I surfed in Boston , Philadelphia during my American Trip and attended so many CS meetings especially in New York city where a great community is active (2013)
- Surfed in Moscow, Niznhny Novgorod and Perm during my russian tour (2013)
- Surfed in Puglia ( South of Italy) during a summer trip on 2014
- Surfed in Dublin and Oxford on August 2016
- Surfed in Sofia on November 2016
- Surfed in Cologne, May 2017
- Surfed in Toronto and Montreal (amazing experiences) , October 2017
- Met a very cool CSurfers and her friends in Bilbao, April 2019
- Surfed in Bordeaux, January 2019
- Surfed in Valencia, March 2022
- Met many CSurfers thanks to hangout in Sarajevo, September 2022

- TV shows: I'm a serious passionate before Netflix arrived in our lives

-Learning and practicing languages: I learned English by myself throughTV shows and travels; Portuguese was not so difficult since I used to live in Coimbra. My hardest challenge is learning Russian, still on it. I also learned Spanish by myself while traveling and organizing Erasmus trips and parties.

Being a Digital Nomad?! It's amazing!

Hike up to Macchu Picchu

Sunrise over the clouds in Madeira

ErasmusDreamTrip on the road http://mythicalnorth.travellution.com/ . I was the winner of this contest and it was one of the best travel experiences of my life

There is not a stereotype of person I would like to meet! I could learn something from every kind of person, every nation has different cultures and I'm a curious person.

All my travel experiences and stories and my experience on organizing trips in the cheapest possible way :)