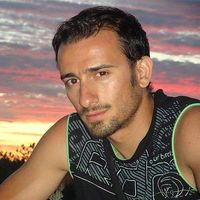 I'm an easy going sport person who likes being active travelling around the world. Life is soo beautiful we gotta enjoy every single bit of if....my two favourites mottos are: 1)CARPE diem - 2)like what you do and what you like will come to you!!!!!!!

My philosophy is never complain but try to solve the problem and live day by day always thinking that the next day will be better than the previous one. I use to enjoy my life a lot and the best part in it are PEOPLE....I have thousands of friends around the world....everywhere I go I make new friendship....because I think that is what life is about people you can trust and they are ready to help in case of a necessity!

I ended up in a CS party by coincidence in Ireland (Dublin) end of last year without even knowing what that was about....over there very nice people told me few things about this program and I decided as soon as I had the opportunity to join this community...and now here I am!!!!!!!

Sport in general (football, formula 1 in particular), music, photography, food and travels. I love trekking and climbing, I like to walk a lot to explore unknown areas, I believe that's the best way to get the most out of a travel (and you even keep yourself fit without paying attention):

I jumped, in 2009, out of the skytower in Auckland (New Zealand) from 192 metres (considered the highest jump in the Southern hemisphere)...but the most amazing thing about it, is: I'M SCARED OF HEIGHTS!!!!!!! I wouldn't have done it not even if it was 50 cents dollar fee but I won a competition (even more amazing if you thing that I joined an half day FREE tour of the city....by the way, obviously it wasn't a beauty contest!!!!!) and the ticket worthed 200 dollars so I had to do that, couldn't waste it, isn't it!?!??!?!?!. P.S. The view from up there and when I was in the middle of nowhere it was really AMAZING (the viewers told me that also my expression when I landed was quite amazing!!!!!!!!!!!