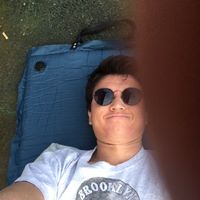 "Trying to wing it, barely floating. Pretty chill tho :3"
I love the above sentence (of my own crafting xd) because I think it applies to alot of people. It describes the idea of 'the beautiful struggle' and the ability to still be light about it, perspective and all that. Accepting an inescapable hard truth and conquering it, owning it. We as humans are not perfect, make mistakes, suffer but in this lies beauty. Perfect beings wouldn't have the negatives, making their positives look easy, less glorious. At least this is what I tell myself :p
A roommate of mine also had a valuable insight in this. He said some people like extremes ('the rollercoaster'). They are capable of feeling intensities. Others who are more to the neutral baseline don't have the deep dark holes but they also don't feel the bliss sometimes.

I like to listen to passionate people, I try to be pretty open-minded about subjects in a conversation.

It's a nice way to travel by not travelling. Paradox, love em.