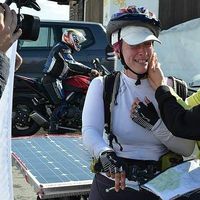 I'm a nomad who's "settled" in Chambéry with my partner Pierre. He's the one making hospitality decisions : https://www.couchsurfing.com/users/1003415036/profile

I am usually roaming North America or Eurasia with my thumb and/or my solar eBike.

I got involved - and eventually devolved on CouchSurfing
https://www.timetoast.com/timelines/11949

Cooked for too many surfers to list them here !

saw Paul Simon in concert
a Peruvian Shaman told me I was a witch
hitchhiked roughly 140,000 km
drank an A&amp;W Root Beer in Krakow
cycled from France to Kazakhstan on a solar bike

I already share what I had to teach in my first book :
La Bible du grand voyageur - Lonely Planet (French and Spanish)

My blog is also a work of love and learning (in French)
http://www.globestoppeuse.com

I'm an interesting person. I mean it :)