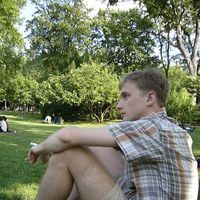 NOTE: ALL INFO BELOW HASN"T BEEN UPDATED SINCE 2007.

Currently i'm studying economics at local university. I've studied lots of different things, but finally i settled down in economics. From my standpoint it was a good choice. I consider myself more of a listener. I don't talk much about casual things unless I really feel accustomed to my surroundings/new-friends that's why i'm not a good entertainer. I'd rather talk about something important which has an impact on one's life. I get along well usually with people who like discussing various subjects and are willing to hear completely different points of view without judging right away whether it's good or not. When i'm discussing i like to listen to arguments not beliefs. I will be an ideal guest, since I can be fun but still well-mannered. I try to enjoy every second of my life. I love to share thoughts cause it is the best way to broden your mind. Wanna know more about me just read what people have written down there.

Every passing minute is another chance to turn it all around.

"Every day you may make progress. Every step may be fruitful. Yet there will stretch out before you an ever-lengthening, ever-ascending, ever-improving path. You know you will never get to the end of the journey. But this, so far from discouraging, only adds to the joy and glory of the climb.ÃÂ¢Ãâ¬ÃÂ W.Churchill

I love a good conversation whether it is about politics, religion, movies or just simply stories about people's experiences. I also like watching good movies, photograpy, good books. I'm eager to learn new things and meet new people.

way too many to enumerate them all