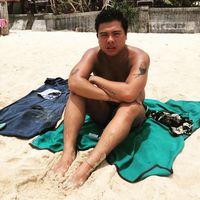 Easy-going and spontaneous guy from the Philippines. I find joy and thrill in exploring new places: asking for directions, getting lost, walking aimlessly, diving off from cliffs, and having conversations with locals.

I do branding, writing, and saving the oceans. My interests are very diverse as well: art, cats, aliens, the universe, sustainability, cooking, dancing. Speaking of, I dance a lot — especially if it's dancehall!

But I do live for deep and sensible conversations: about life, why things are the way they are, the nuances of human emotions, etc. I tend to ask questions a lot, and that’s the beauty I have found with traveling and meeting people: the exchange of thoughts and in effect, a meeting of souls. Amazing souls you know for days but last forever!

I love the ocean more than anything else (next to my mother, of course).

Lastly, I am a big hugger! The world would be a much better place if we give hugs more often. 🙏🏽

I live in The House of the Red Couch with 4 other Couchsurfers and we open our home to surfers who would love to have a great time in the Philippines. A cookout at home, a nighout of drinks and dancing, or a trip to a nearby waterfalls all sound good to us so if you are down for it, you are more than welcome here!

Books: The Old Man And The Sea, Tuesdays With Morrie, The Little Prince, Whatever You Think, Think The Opposite, Will Grayson Will Grayson, The Traveller

I was once told by a friend that the world would have been less colorful without me in it. That’s probably the best thing I could share with you and the rest of the world: new shades of excitement, conversations, and connections!

But I can also cook really good Adobo (Philippines’ national dish) and have a discussion/sharing on Branding, Marketing, Sustainability, and Marine Conservation.