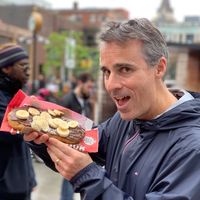 Since 2012 I've been a full time blogger. My blog, Frequent Miler, is all about frequent flyer miles. We show readers how to earn points from home so that travel can be (mostly) free.

I grew up in New Jersey and wrote computer games as a teenager. I started college at RPI in New York with the intent to study computer science. I somehow drifted away from programming for a bit, switched to psychology, and transferred first to UNC in North Carolina to finish my undergraduate degree, and then enrolled in a Cognitive Psychology Phd program at Vanderbilt in Nashville, TN. As I got close to finishing my doctorate I regained my old interest in programming and spent the next 20 years or so in software development.

Late in my corporate career, I discovered a passion for points and miles. Points and miles made it possible to travel more often and in more luxury. It's a game that offers real rewards. I started blogging about it, and it quickly became my full time career.

There are three authors on my blog and we decided to do a competition against each other: 40K to Far Away. The idea is that we would each have 40,000 points plus $400 and we would each have to figure out how to take the biggest possible trip with that budget. We are scheduled to depart October 2nd from Washington DC. Other than that, none of us know what the others are doing. Anyway, Couchsurfing seems like the ideal way for me to win this competition. Couchsurfing offers both free lodging and, more importantly, a way to meet locals who can help show me around and show me the best deals in their city!

You can read about our 40K to Far Away Challenge here: https://frequentmiler.boardingarea.com/40k-to-far-away-news/

My wife and I spent a week on Richard Branson's island. Using tricks I write about in my blog, it took me 7 months to earn 1.2 million Virgin Atlantic miles. With those miles I was able to book one week on the island, for free. Normally prices start at about $35,000 for the week! All meals and activities (including scuba diving) were included.