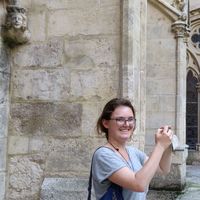 Some adjectives that fit me:
Progressive, curious, listener, open-minded, understanding, positive, outgoing - all that with a pinch of playful mischief :). And mind you: I can be very shy every now and then.

Sometimes I see my person as a bunch of paradoxes I'm trying to figure out. Or not really maybe, because that's also what keeps me going!

People are very inspiring!
I like being around people, sharing experiences and values, and exploring new insights or hobby's.

I'm always in for a talk about
- books, writing
- social behaviour, relations, psychological stuff
- nature, animals
Or anything that interests you :).

I really like music, movies and books, but still far too ignorant in these domains! So don't hesitate to give me some extra "to listen to" / "to watch" / "to read".

Some of my preferred genres / artists:

MOVIES
Historical / psychological / drama ; sometimes also adventure &amp; fantasy. Movies that moves me most so far: 'Tot Altijd', 'The Broken Circle Breakdown', 'The Theory of Everything', 'Marina', 'Gorilla's in the Mist'.

BOOKS
Similar genres as the movie genres I described, fiction and non-fiction. And also: poetry and graphic novels. I mostly read fiction that could be real. Sometimes, more than the actual story, I appreciate an original take of the author.
Some of my preferred authors: Milan Kundera, Jonathan Safran Foer, Kristien Hemmerechts, Herman de Coninck, David Van Reybroek, Toon Horsten (there are a lot of Dutch / Belgian authors here).

In July, I walked 779 km from Saint-Jean-Pied-De-Port (France) to Santiago de Compostella (Spain), also known as the Camino Frances de Santiago. I started with an awesome Danish friend, and we met a lot of people on our way. One of the best experiences I've had, I'm still under it's enchantment :).

I'll introduce you to the amazing world of swing. Not the relational/sexual practice most people think first of, but the dance: lindy hop, charleston, shag...
Apart from that, I can share some information about the history and culture of Belgium, and we can explore topics of interest!