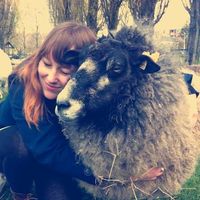 I'm a freelance illustrator based in Rotterdam, The Netherlands. I graduated from art school in 2011 and now I mainly make music posters (check out my work at www.nikkismits.com).
I live with my boyfriend (https://www.couchsurfing.org/profile.html?id=GPMPJWA), 2 cats, 3 chickens, a turtle and a few fish! We're both vegetarians, but we don't preach ;)

I travel a lot together with my boyfriend, since 2017 I work fulltime as a freelance illustrator and graphic designer and I try to work even if I'm abroad. It's great to be able to combine work and vacation :D

I´ve had such good experiences with couchsurfing, it´s a way to meet locals if you´re travelling, but it´s also great to meet people from other countries when I´m hosting :)

Movies:
Anything with a lot of imagination, like fantasy, sci-fi, post-apocalyptic themes. Lord of the Rings, Studio Ghibli stuff, 2001 a Space Odyssey, Moon, Star Wars, Matrix, and not really a movie: Rick and Morty :D

The most amazing thing? It probably involves nature, I loved the caves in Thailand, the jungle of Indonesia, going on a roadtrip with my CS host in Scotland. I dunno, there are just so many awesome experiences when travelling!

Taking the local transport is always much more fun than tourist busses.

Travelling is not as perfect as it might look from other people's pictures, but crappy situations can make good stories. Like renting a shitty scooter in Thailand and going up a mountain is not much fun, but afterwards you can see it as an adventure. Or having to run away from an agressive Oranutang was scary at the moment, but it makes a great story :D

I can teach about drawing, traditionally or digitally. Or share stories about working as a freelance artist.