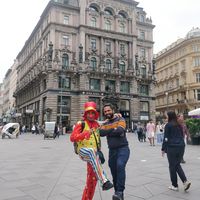 A minimalist currently living in netherlands for work. Like travelling, droning earth and getting immersed in various cuisines. Love discussing philosophy, life paths and goals.
I like music, a fan of sufi also sushi ;)
I am a nobody in the corporate world.

To make friends and spread togetherness

Books: The Fountainhead, Other side of me, To kill a mocking bird, Sophie's World, 1984, Dear John, Metamorphosis

Movies: Before trilogy, Eternal Sunshine of the spotless mind, you've got a mail, Forrest gump, Schindler's list, Big Short, Enemy at the gates, Requiem for a dream. Naming a few is a shame.

Left the corporate rat race and all its cravings

A place to sleep and a few smiles