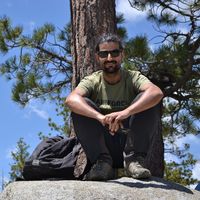 I'd say I'm rather outgoing, friendly and talkative. I'm Mediterranean; we don't do silence ;) I like spending free time with friends, having some beers and chatting over all sorts of topics. Always smiling! :)

Because it's amazing! I've met wonderful people on here and learnt tons about the world!

I'm interested in languages, literatures, history, anthropology, psychology: culture in general. I also have an interest for indigenous and minority communities. I love travelling and meeting people from every corner of this little world.

I'm quite skilful in languages and I'm always open to learn more languages and teach those I speak. I also have the ability to bring any conversation into the linguistic field. I believe that you get to know people better through the language they speak.

I can also teach you why "Catalonia is not Spain": toros and flamenco are as foreign to me as they might be to most of you :)

I enjoy cooking very much and I'm always happy to share Catalan cusine with anyone interested in learning some new recipes! :)