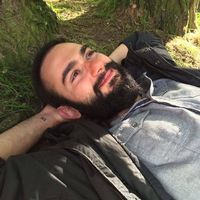 For spelling my name think about Alejandro (Lady Gaga), and cut the "dro" at the end, so "Alejan". Now you have the correct spelling. It means Great King in Turkish, which I am unfortunately not. So, I cannot provide you servants to serve or a stableman to take care of your carriage or feed your horses, but I am a man of hospitality and service myself.

I'm living in Ghent for more than 6 years now. I work as scientist at the uni but now I am working in a company. In my free time I'll probably be playing guitar, singing, acting, meeting friends, learning a language, working out, chilling, binge reading Wikipedia, cycling, trying to write stuff etc.

I'm easy going and empathic person. But of course, just like everyone, I'd expect the guest to respect the house and my life, and communicate clearly about everything related to the stay. I had several occasions where I had to "parent" some very irresponsible and needy surfers. I'd like to avoid that, like, forever.

Depending on each other's plans, we can talk, I can show you the city, if you like languages or playing music, I'd be happy to do language exchange or jamming with the guitar, but not necessary. Sharing crazy stories. Deep talks. Inspirations. The list can go on.

I have a specific interest in Eastern European culture, art, literature and languages. I don't want to die before learning a Slavic language. I've learned some Russian and Czech before, but it's hard and I don't have enough time and focus anymore. Well, inspirations are welcome!

Like a gazelle from the hunter's hand and like a bird from the hand of the fowler, free yourself.

Hosted many times in Turkey and Belgium. Surfed in Germany, Netherlands and France. Other than that various community activities during travels.

I can teach languages and how to build things technically. I can share my knowledge in repairing bikes, Mediterranean cooking