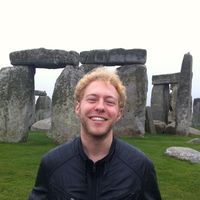 A 30-years-old burning soul, always striving for lively moments of intensity. Working as a political representative (lobbyist is a bit too shallow, but it's the easiest to understand, I guess :D) for a trade association in Berlin.

I grew up in Düsseldorf, left this city after 22 great years and fled to London in order to do my MA at King's College London. In 2015 I graduated in Political Economy (MA), moved to Frankfurt where I worked for a while, returned to Düsseldorf in 2017 and theen moved to Berlin very recently in January 2023! So, kinda took my last chance to fully experience this city as a young lad :P

I'm eagerly looking forward to living in and exploring more places in this fascinating world and meeting great couchsurfing folks along the way :)

I've been living in London for a few weeks when I realised how great it is to live in such a diverse city and I became even more interested in getting to know people from all over the world than prior to this episode of my life.

Also, I'm a hobby musician and in 2012, I began to write songs in various different languages - with the knowledge of people from Croatia, Estonia, Portugal, Sweden and other countries. I'm always eager to write songs in the domestic language of the people I hosted :)

Why am I still on Couchsurfing? It's the fantastic experience. During my Master's studies, I hosted five great personalities. Later on, I traveled across Europe and occasionally surfed by myself. Couchsurfing offers a very rare opportunity to combine three things: Enhancing one's perception of what human beings actually are, saving money you can use for exploring and experiencing stunning celebrations you wouldn't even think about before.

Experiencing and making music; organizing and celebrating crazy events, philosophy and politics; writing books; Marathon; spending nights on endless drinking or enjoyment with Mary Jane for those who know :P