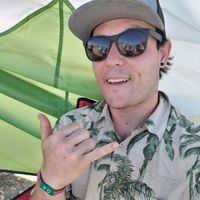 Update: I've moved back to the island of Oahu on Hawai'i where I am working and paying off school debt. If anyone wants to meet up and do language exchange, I can show you around to some beautiful spots and great places to eat!

I travelled around Europe with nothing but a backpack and big dreams. Now that I'm back on this expensive rock, I can give people recommendations about things to do and places to eat on Oahu. Adding more experiences to life is what this mission is all about. I would like to give back to those who have blessed me so far along my travels. I look forward to meeting you and sharing cultural experiences with you and your friends.

To create a network that values helping and sharing information to allow others to enjoy their travels even more.

My interests include(d) volunteering, cooking, wild camping, teaching, and learning new words from different languages. I look forward to meeting you and sharing cultural experiences with you and your friends.

Music
I went through multiple phases of 70s, 80s, 90s, and rap music. For the past decade, it's mostly been electronic music that I've enjoyed the most.

Movies
If it's entertaining, I'll watch it.

Hitchhiked for 10 months in Europe, volunteering on farms, in hostels, and in people's homes. During this time, I was fortunate enough to visit around 20 countries while meeting some amazing blessed people.
I wrote about some of it in a blog called Holden the Hitcher.

Beginning at the Cadiz Carnaval in Spain, I made it to Portugal, flew and hitched around the UK, southern France, the Balkans, Eastern Europe and Italy.

Some stories included:
Catching a ride on a sailboat in Ibiza and jumping into the ocean to get to dry land with a laptop in my pack.

Traveled to New York, Tennessee, and Atlanta with nothing but a camelbak and a rolling suitcase, camping outside and only using public transport for two weeks.

Making moonshine brandy in an abandoned village house in the mountains of Croatia.

Camping everywhere from beaches under lighthouses to snowy mountaintops, from catholic monasteries to the largest of city parks. It was an amazing ride.

Sectioned hiked the PCT.
Travelled most of the Hawaiian islands.

I can teach about sports, cooking, and my native tongue is American English.

Let's share a meal together, because food is the window into the soul.

I'll help with any projects or daily chores, or offer to cook. I like to stay busy