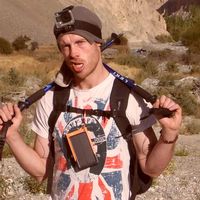 Right then, this is the part where Del talks about myself without the aid of a sofa and an internet qualified shrink. A little different to what I'm used to but nothing I can't handle.

I'm a regular guy from London who likes dogs, festivals, cheap jewellery, bubble wrap, sampling world beers without getting too bladdered, riding my motorbike at night whilst listening to Underworld, foreign food, people who cook me foreign food and mixed martial arts.

My aim in life is to create as many new and diverse memories as I can so when I'm an old man sitting on a rocking chair out on the porch and my equally old companion sitting next to me asks, 'What did you get up to in your young days?' I'll be able to give him an answer that will cause the poor bugger to have a cardiac arrest. I think I'm doing alright so far &amp; feel lucky to have had so many great experiences. I finding my attitude to travelling is changing as I seem to be focusing more on culture rather than sights. Soom I shall be travelling through Central America for 6 months where I hope to develope my Spanish via tuition &amp; chatting with as many locals as possible, volunteering for organisations and at some point &amp; settling down for a month or two in a town / village / city to build my very own Central American social circle.

I'm no here cos travelling half way around the world to stay at a hostel and end up going on pub crawls with Boris from Germany and Helga from Finland absolutely sucks. I've had a blast so far CS'ing with locals and now find myself in a position to give back to the community by hosting visitors to Manchester.

I get involved with the social side of CS too and like how it's grown to include the locals as well as international travelers. Often I'll do a random shout out on the forums if I'm catching a band or whatever to see if people would like to tag along.

My typical interest is 14.9% - some say I single handily caused the global financial crisis...

Leaping out of planes is always a giggle. I got a skydive licence see, which is a bit like James Bond's licence to kill, only much better. I like to write too. I'm a sarcastic little bugger at the best of times and try to write things that make me laugh - this would be black humour then. I blog cos I have the memory of an Alzheimer's sufferer on the morning of a hangover.

Movies I like to illegally download have well shot original scripts or have some great performances by its often underpaid actors, you know, cos of the illegally download thing. And foreign movies, by which I mean non UK / US films, cos they throw up some great stuff without much recognition coming off it.

Rock during the day, Metal when I'm writing, Acid Techno when the sun goes down. And then rises again. And then for quite some time after that. Music happens to greatly effect my mood as it goes. Stick me in a bar / club with shite music and I'm confident within myself to stand still on the dance floor. I'll leave the conforming to others. My sanity will only take so much however, and eventually I will excuse myself to 'go for a walk'. unfortunately, this tends to be most bars these days!

Sven Hassel is pretty good, but you probably don't know him. He's a Danish guy who fought for the Nazi's in a penal regiment. His books are faction and bloody funny. Dark, black humour - odd reading cos you're rooting for him and his Nazi mates as they do their war thing.

In South Africa I went to a pub that was inside a boabab tree. That's inside the actual tree - I had to see it to believe it. It's the biggest boabab tree in the world, 26 metres in diameter and over 6000 years old. I think.

Falling through clouds is pretty awesome. I'm thinking it must be a bit like how Tony Montana feels when he plants his face into a heap of cocaine in the movie Scarface. I really ought to go to Central America and make the comparison... anyroad, back on the topic. Flying through clouds dude, there really is no other feeling and is impossible to describe without a smile growing on my face. I'm even grinning as I type this...

After spending nine days trekking to Mount Everest, I went about whooping which caused a deep rumbling avalanche somewhere on Everest or one of its neighbors. Whilst I send my condolences to the families of any trekkers I might have wiped out, you gotta admit causing a Himalayan avalanche is pretty fucking cool.

Here's the part of the profile where I take the opportunity to learn new shit! Here's some of the things I currently need a helping hand with...

I recently acquired a pressure cooker but don't know any recipes to use the damn thing. It's more complicated then it looks and I fear I will blow my house up. If any hosts stop by with experience of this thing then I'm much appreciate a demo.

Video editing! what with Window's Movie Maker disappearing off Windows, I'm having trouble finding a decent video editor that is smoothly compatible with GoPro. If making movies of your trips etc is your thing, I'd be happy to get a crash course in editing by offering a place to stay in Manchester.