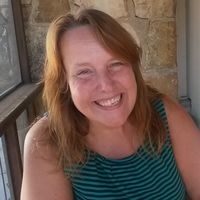 Spreading sunshine and happiness to all those around me, while finding a place (or two or three or four) where, like Bilbo, I can finally finish my book.

Kind, trustworthy and brave. I laugh a lot at the absurdities of life. I really love theatre, especially Shakespeare. I try to be a good mother, and think my children are terrific people. I've friends from all walks of life, and enjoy connecting them with one another. I enjoy natural settings and cities equally.

I have visited all fifty states, Canada, the UK, Ireland, France, Spain, Italy, Switzerland, Austria, Belgium, Germany, and the Netherlands. You haven't lived until you've watched Sponge Bob Squarepants in Gaelic and Dutch.

Be deliberately sensual. Live with eyes wide open, ears pricked, tastebuds at the ready. Touch things to feel their texture, like soft moss and rough bark. (Try to avoid shiny leaves and poisonous creatures.) And sniff the air. There may be the scent of jasmine wafting your way. Or bacon!

HOW I PARTICIPATE IN COUCHSURFING
I surfed with some great folks in Hot Springs and Eureka Springs. So I'm officially a couch surfer! Though, to be fair, the "couches" were gorgeous guest rooms with queen size beds.

Previously, I've surfed on behalf of a friend, acting as his Pepper Potts, writing requests to potential hosts as he made his way across the US. So many great people replied to me, and a bunch hosted him.

And once I'm back home, I look forward to hosting travelers.

Although I have hosted folks who needed a place to stay at times, it's not been through the couch surfing site. I've stayed with a few friends I met on the internet or through various organizations, so I'm familiar with the concept. Also, I've used airbnb for lodging. While that's a payment deal, a few of the rooms are so inexpensive as to almost make it couch surfing… :-)

I've served on many volunteer boards for causes like clean air and water, wild lands protection, smart urban planning, and campaign finance reform. I've volunteered with theatre companies. I adore my two children and delight in their witticisms. I love the cinema and musical performances. I truly love to cook, particularly with local farmer's offerings. I teach and write. And I would happily travel from place to place the rest of my life. So much to explore!

American Beauty, Bottle Shock, The Artist, Iron Man, X-Men, House of Cards, Agents of Shield, How To Get Away With Murder (yes, I know they are TV series, but they rock), Now You See Me, Salmon Fishing in the Yemen, Casablanca, The Princess Bride.
Imogen Heap, Bastille, Thomas Newman, Randy Newman, Abel Korzeniowski, Coldplay, and a million others.
Anything by Alexander McCall Smith, PG Wodehouse, Hugh Laurie, Stephen Fry, Arthur Conan Doyle, William Shakespeare.

I've witnessed brilliance. My son performing as Malvolio his freshman year, then as Darcy his sophomore year. My daughter singing Jack Johnson's "Breakdown" a cappella in her fifth grade talent show, then earning AP Science credit her freshman year. (Yeah, I'm a proud mama who thinks her spawn are geniuses.) I've seen gorgeous national parks throughout the US with wonderful wild animals. My family and I spent a year in Europe on sabbatical, exploring castles and villages, swimming in the Mediterranean and talking to Patrick Stewart on the street in Stratford Upon Avon. Every time I see a new vista or revisit an old beloved one, I'm energized.

Each person has something to contribute to my education about the world. I'm constantly impressed by the new things I learn from others.

I know a goodly bit about how governments work, and how to lobby effectively for change. Legislative campaigns as well as electoral efforts to get good folks in office. I'm not half bad at research.

Fun stories about my life, great conversation, and a willingness to cook if they'd like me to. My company, listening to their wonderful tales about their lives. People love to share, and staying with them gives them an audience. :)