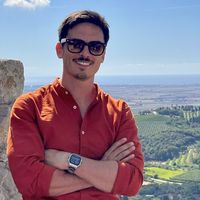 CURRENT MISSION
Finding beauty in a world of chaos.

ABOUT ME
I spent a life in playing with visual arts and communication, I think that gave me some special sensitivity for aesthetics, but also for social issues. In my concern to understand the world, I'm still considering the possibility of doing a PhD in the field of Social Sciences.

Doing sports is not something that comes naturally to me, but my love for nature and social bonds have pushed me to train regularly. In particular, hiking is my favourite activity, but when I'm not in the mountains I go running or bouldering.

PHILOSOPHY
I have reached a point in my life where I feel that every minute must count, I have the feeling that life is too short to stand still! I love to feel challenged and try new experiences.

HOW I PARTICIPATE IN COUCHSURFING
When I lived in Argentina, I was able to host some Couchsurfing members, it was a nice experience.
A few years ago I moved to Germany and no longer have a place to offer, but I was hosted by other members.
I love the idea of a "gift economy" in which we can all give something without expecting anything in return, I think it's an initiative that makes this world a friendlier place.

COUCHSURFING EXPERIENCE
I first heard about Couchsurfing from a friend, when she told me about it I thought it was a wild idea!
But then I had the opportunity to participate in the community and discovered how great it can be to get in touch with people from all over the world in this way. I met some of my current closest friends through Couchsurfing!

I am extremely curious, I'm interested in pretty much everything, but just to drop some random topics: future of humanity, mountaineering, climate change, social sciences, collectables, weird stuff.

I left a perfect comfort zone in my home country, Argentina, to start a new life in Germany, without speaking a single word of German!