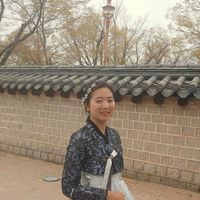 Hello, I am Hyejin from Korea. I was in Southeast Asia for a year between year 2014 and 2015, and I traveled Europe between Sep 2018-Mar 2019. I've stayed in New Zealand for over two years and now I am in Australia.

I like laughing. I get entertained by things easily even if it's something small. A friend of mine even recorded me when I was laughing so hard so she can use it for a ringtone. That's one thing about myself.

1) I would like to have good conversation with people from different backgrounds. I find it interesting when I see some differences in culture. A lot of times I feel all humans are the same, but at the same time there's huge differences in culture depending on where you have grown up. I want to find out more from couchsurfing.

2) I like hanging out with people. (But only when mutually agreed.) I would be happy to have fun.

So basically I want to meet new people. In Korea, I tend to contact with people who have similar way of thinking as me, and similar interest as me. Now I want to get influenced by different people and also affect other people in a good way.

I like walking, talking, exploring, multi-day hiking, climbing, and spending time with cats.

Movie - Monsters university!!
It's not a movie, but I like this video, nastyass honey badger narrated by Randall.

-I've been extensively doing multi day tramping in New Zealand and it was beyond my expectation. I should probably write about it in my free time.

-Volcano climbing from 1am in Indonesia to see the sunrise. No trees to block the wind. Had to crawl using my both legs and hands, four of them, to get all the way to the top. The best sunrise ever. Completely knocked out after.

-2 week winter climbing in Mt.Seolak in Korea. Forgot the tent poll one time. Set up a tent somehow. One person out of five had to make sacrifice. Lost from the card game and I became the one who had to sleep outside the tent in winter when the snow was falling on my face. *Amazing* Couldn't distinguish if it was my tears or melted snow on the face lol

I can tell you Korean culture, history, and my travel story and what not.

If you are interested I can teach you basic korean expressions / useful slangs.

I'll figure it out