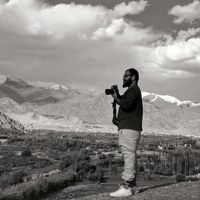 Well well, the last two years have been the most intense and transformational journey in my life as of now. Got covid twice and survived haha, typhoid before that and survived that as well, probably I'm iron man now 😁😁 but I'm so glad I was put through these intense moments in life as I've rediscovered myself as a person on this journey of life and now I'm also full time focused on working as a mental health advocate, learning cognitive neuroscience, oil painting , learning violin and simply on a mission to spread joy and hope in the world as much as I can for as long as I'm here 💖

I've been on the road for almost 4-5 years but I recently decided to take a break from travelling, to plan what's next, find a new base to live for a while and keep learning new skills in life. On my travels I got drawn to lot of new exciting stuff like Contact improv dance form , learning about crystals, energy healing, cooking, doodling and my favorite is probably massage therapy. Its been a year since I'm practicing being a massage therapist and i'm absolutely loving the journey I'm in right now.

Finding the real purpose of life , following my passion and just go with the flow , enjoying the moments without thinking about the future . I never believed in theoretical education going to a university and it turned out to be so true in my life , I studied engineering wasting 5 years of my life for nothing in the end . I believe traveling is the best education one can get in life and its worth any amount of money . My life has completely changed since July 3 , 2014 when I met with an accident while riding around India on my bike and made it alive somehow , made me realize how everything can get over in just moments . Since then I decided to go for what I want , chase my dreams no matter how impossible it looks right now . I almost lost my right leg in this process but I am glad I am alive to fight for what I want in my second life . It was all about creativity , innovation and art for me since my childhood . . Music, art, adventure and riding: well that reflects what I'm all about I guess, I always love being around like minded people. And I regret missing the chance to meet Dalai Lama who was just 1 km away from me when I went to a Tibetan village due to security reasons :(

By changing nothing , nothing changes .

meet couchsurfers from around the world , sharing our stories , taking them around the city on my motorbike .

It's been a really great experience to host and travel with people from across this beautiful planet .

The Couchsurfers i have hosted/traveled with so far :

Books : the alchemist , atomic habits, homo sapiens , Stay hungry Stay Foolish , Follow every rainbow , You can win , Ask why..think why not ? , Soul's journey to its destiny , The man who found infinity .

So many things to write here , but to name a few :

Met with an accident on july 3 , 2014 that made me realize how short our lives are and how quickly everything can change in just 10 seconds .

My first exhibition and it happened in Europe, Vilnus ( July 2016 )

Slept under the Milkyway at 4800 meters freezing myself but it was the best thing I ever saw in my life until now.

Spent a night on a fishing boat inside a mangrove forest on a full moon night, unforgettable.

Encountered wild elephants deep into the jungle on my motorcycle and got a bit more closer to mother nature.

Spent a day with the last living nomadic family in ladakh to learn more about their disappearing culture and was privileged enough to photograph it all .

I can teach you how to cook South indian food, share my knowledge about photography and art, teach you massage therapy.