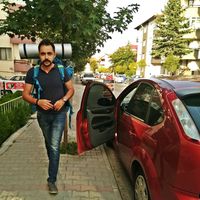 One hell of an English Teacher from Kayseri/Turkey.
Restless traveller, camper and musician,
Cooking freak, fond of all kinds of different tastes, you name it!
Love long, deep philosophical talks about nature, the meaning of life, religions, beliefs, experiences, spirituality...
Really into ancient civilisations and cultures, especially eastern,

The thing about Couchsurfing is that it helps you to explore different cultures and lifestyles as they are, not as some travel agency shows you they are.

I know that: the more we travel and get to know new people, the less seperated we will be from each other.

And I also believe that there are as many beliefs as the number of people in the world, from youngest to the oldest person. Everyone has their own ways of understanding the world and nature. This means that there is always something to learn from people.

So, Couchsurfing is a great way of getting to know new people and learning from them.

As well as being a teacher, I'm also a musician. My primary instrument is guitar, but I love learning new instruments. It's such an exciting thing for me. I also play bağlama (a kind of Turkish traditional string instrument), ney, and planning to learn santur (which I think is a very mysterious instrument).