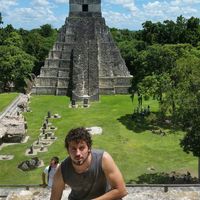 Well, I am Igor , a structural engineer working in seismic engineering of historical buildings and monuments.
Also I work as an Unsullied in Game of Thrones, since it's shot in Croatia ;)

Born and lived most of my life in Split. Also lived for some time in Prague and Barcelona. Now living in Lausanne.

I do and like all kind of sports, at the moment just jogging and going to Gym and from time to time playing football , basketball and tenis. Also I musn`t forget "Picigin" - authentic Split sport that I can present to surfers coming to Split. I like get out and hang out with my friends. Most important, I try to be very positive and optimistic about everything.

Actually, the best way to describe myself would be curious- so far I haven`t found something that wouldn`t interest me.

Based on "The law of attraction" - saying that by positive thougts you get positive energy and attract positive events. I am absolutelly not superstitious but there is something in it, at least placebo

Carpe diem ! Enjoy your life as much as you can , while being responsible. Regret nothing =)

So far only the best expiriences !

I really like to read a lot from wide-range scientific books to classical literature. Some of favourite books:

But most of all I like National Geographic magazine. Had a opportunity to read many of them as old as 1950 from my grandfather`s collection

From movies my absolute first pick would be the Godfather series ,especially the first one.

-Well it was amazing when i was hitchiking in some Luxembourg village trying to find a transport to Luxembourg city. Guy stopped and when asked is he going to Luxembourg he said "Yes". However it turned out he was going towards Brussels and took us with himself. But then he stopped in Luxembourg took us to sightseeing and lunch, and then to Brussels. Afterwards he drove us all the way back to Trier where we had couchsurfing (amazing host, to mention ! ) . When I asked him why did he do it he just replied : "Well it is a good deed, I dont want anything in return to me , just do the same to everyone around you and World will be better" Anyway, those were very inspiring words to me.