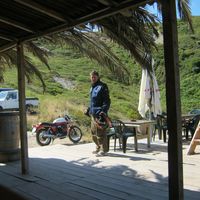 Actually, i was born in Bilbao, Basque country, but don't remember that much of it anymore, so i guess Holland count's right?

Preparing me and my motorcycle for around the world trip for an extended period, but if something comes in between and its not gonna happen.

Well that's fine too, i guess.

ABOUT ME
My life has been dedicated to my dad for the last two years, now its time to leave again, as he wanted me to, and write that book, as Edeet adviced me to do.

We are all neighbours, and probably doing nothing would be great for the environment, so maybe better to buy less, its nice to have some dreams left.

Through a good friend whom i met at a hostel on Cape Breton, Nova Scotia, Canada, and had the pleasure of tracing and introducing her(i speak the same dialect)to her Dutch ancestry.

Been hosting and hosted by people while traveling on my motorcycle across North America, just not through this website

Ride through the Sahara desert on my motorbike, meet Touarech, and running into my previous employer in the middle of the Sahara, no idea where, i was lost.
A whale on the coast of New Foundland sticking his head out of the water staring at me while i was staring at him from a small craft, having swims with dolfins in the Gulf of Mexico FL.
Entering a beachrace with 800 motorcyclists.

I've met so many nice people on my bike across Canada and the US, its amazing how you're having conversation with a stranger at the gas bar (newfoundland), one minute and then having a barbeque the other with the entire family, just to many wunderfull experiences and story's to tell.

Buy an old Caddy Eldorado in Miami, and drive it to WA state, camp out in the Badlands, Florida Swamps, lose the convertible top somewhere in Butte Montana, thinking you can open the top at 70 mph, no you can't, meet Mormons in Utah, Amish in Pa, running into a guy on a bycicle somewhere in NY state, he turns out to be my uncle's neighbour, from a town with roughly 2000 inhabitans, poor guy was on his way to Kennedy airport.

Doing karaoke with Native Americans somewhere on the prairies of Sakatchewan on a Sunday afternoon.

Sometimes running in some the most wonderfull folks, and sometimes into some really bad ones ....

Forrest gumpy livestyle, i guess, then winding up driving big trucks across the us and canada.

So now i bought a surfboard and learning how to do that, pretty awesome.
and trying to fix my bike, motorcycle with some friends in Granada.
Life is like a box of chocolates.... it truly is.

Whatever comes up, as everyone is a unique individual, there's always good stuff to share and learn.

Maybe some language skills and life and coocking experiences, travel advice, and what not.