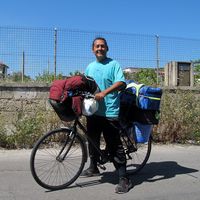 To roam the world, travelling by bicycle, living in a different country each season, learning the various languages and cultures, working with different people on different projects...

CURRENT LOCATION: In the USA during 2020, Cycling for The Green New Deal! Join me! Or support me! ;-)

As I cycle around the world, I'm always hoping to find ways to realize my mega-pet-projects regarding a language cafe, hostel network, language learning and travel network, Spanish course on YouTube, and other things, but for 2020 I hope to find not only one partner but many to participate in my new project, "Cycling for the Green New Deal" throughout the USA (mostly south, east and northeast/midwest states). Come bike with me!

You can read a bit about my bike trips here: http://www.crazyguyonabike.com/doc/zigzag

As I bike I work as a "Nomadic Translator" for companies and individuals by email and as an online language teacher and consultant mostly via Skype.

I guess we can say that I'm "homeless" -OR- that I have many "homes" in many places: my tent in fields and forests along the way, the homes of Couchsurfing or Bewelcome members. I also belong to Warmshowers, which is like CS but only for cyclists. Occasionally I will "settle down" and rent a room in some places for a few months at a time. Anywhere I feel comfortable and can remain for a while is my "home."

I was born in Puerto Rico but only lived there until I was 8-9 years old, thereafter in the USA and Spain. I also lived for many years in France, Germany, and Japan. I don't identify too much with any one place. We are all citizens of the world, only some people don't realize it, but they are, and they should claim and enjoy their rights and privileges.

I tend to minimalism and feel somewhat (sometimes very!) frustrated in this automobile-oriented society, with so many artificially created and consumerist needs, so much waste, non-critical, unconscious living. And the military spending!

Until recently I had been pretty much politically inactive, not going to demonstrations, not contributing to political associations. I had always been politically minded, but I tried to live out my convictions in my own way, through the limited sphere of my personal lifestyle. I am interested in alternatives to the capitalistic casino-like economy that exploits so many people, and would like for us as a society to find a different way of working and earning "credit" (a different monetary system) and establish more democratic and just work relations.

In addition to my current bike trip, I would like to make my own life a sort of "PNGO" (personal non-governmental organization), volunteering for and featuring worthwhile collective or individual projects in my blogs and websites, facilitating communications, channeling donations, making my own trajectory an organically growing and extended instrument of micro-financing and philanthropy. More info: http://nomadic-translator.blogspot.com/

If you need translations or know of anyone who might, if you want to learn one of my languages and I happen to be in your city (or you feel like learning via email and Skype), if there is anything I can do for you along my itinerary, drop me a line! I'll be announcing my present situation and direction here.

I also have two mega-projects I'd like to develop (or at least get rolling) before I kick the bucket:

Some of my favorite quotes:

"The world is my country, science my religion" -Christiaan Huygens

"The mystery of life is not a problem to be solved but a reality to be experienced" -Unknown.

"Be the change you wish to see in the world" - Gandhi.

"Just because you're paranoid doesn't mean they're not out to get you" -Unknown.

"It is no measure of health to be well adjusted to a profoundly sick society." - Jiddu Krishnamurti.

I do believe in the mind-expanding benefits of travel and cultural (not just commercial) globalization as a remedy against the evils of nationalism and other identity problems. So I feel the urge to move around, to get to know the Other in order to know "my" Self. So getting to know places and languages is a big part of my life.

Recently, though, I'm more interested in what is between cities than in the cities themselves. I'd rather spend time with people than doing "obligatory" touristic visits.

Sharing some experiences and things with like-minded (and sometimes very different) people, to give honest and hopefully favorable feedback, and sometimes by participating in the local activities . I have always lived with many different kinds of people and I am respectful of others' personal stuff and space. I am clean, quiet, considerate. You won't have any problems with me!

In Chicago I only hosted a little bit, but as soon as I have the opportunity to host again, I will do so. Maybe someone wants to join me in my tent, or next to it with their own tent? And bike with me for a while?

I have very modest needs. I just need a bit of space on the floor, that's actually my preference: with my camping mat, my own sheets, and sleeping bag. This is more expedient, good for my back, and saves on the energy and effort of washing sheets and other bed stuff.

My motto is, Let's keep it simple! (Except with my profile here, LOL!)

So I don't like to have to meet or make people try to meet expectations of guest-host relationships, ceremoniousness, etc. Also I'm "low maintenance," that is, you won't need to show me around or stuff like that. Because I'm cycling, I usually just like to rest and eat, do internet stuff, and I prefer to meet and talk with my hosts rather than going out to do "tourism," although I do enjoy doing that sometimes, too, and we can do that if you feel up to it.

For 35+ years I've been a language teacher, mostly of English and Spanish (my mother tongues) but occasionally also of French, German, or even Japanese, languages in which I'm proficient.

You can read my bike journals here: http://www.crazyguyonabike.com/nacho59

Currently I'm trying to develop a philanthropic project (HP2 or Help People squared, that is, Help People Help People) to collect donations from all kinds of people and channel them to worthy causes and organizations. You can read about that here: http://www.iduran.com/

I would really be interested in translating texts related to renewable energy sources and social business, please help me find clients in these fields!

Books that particularly influenced me in my youth:

My students laugh when I say that one of my "hobbies" is reading books on grammar and linguistics.

Are those too cheesy? Do they mean anything to anyone out there?

It's not so very amazing but I did have my own language services company, that is, basically a language school offering intensive Spanish courses, and a translation agency in Seville, Spain, for about 10 years. Unfortunately, in the end I lost a lot of money and had to give it up. I think I'm a good teacher and translator but not always a good business man!

One more amazing thing: all these years, and I've kept out of trouble?

I can teach, share or help out my languages, and details of life in the various countries I know. I would like to learn about computers, or IT in general, maybe music, painting, cooking...

Some food and drink that I may bring in my bags, conversation about all kinds of things, my knowledge of languages and modest cooking skills.