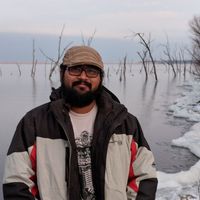 I'm a graduate student pursuing PhD in Mathematics (and trying to get a Master's in Philosophy on the side). Thus most of my work revolves around study, research, and teaching. I am originally from India and have been in the US for the last four years. Outside of studies, most of my time goes to (listening to) music. I like to attend concerts and music festivals a lot, which often end up being reasons for some of my travels.

It seems like a great way to meet people with similar interests from all over the world.

There are too many bands to list. I listen to most genres of music and particularly like Alternative Rock, Progressive Rock, Indie Rock/Pop, Dream Pop and Acoustic/Folk. Some of my favorite bands/musicians include but are not limited to: Radiohead, Nirvana, Damien Rice, Corey Taylor, Muse, Band of Horses, Blue October, Kevin Devine, Cage The Elephant, Steven Wilson, 30 Seconds to Mars, Manchester Orchestra, Holy Sons, Nine Inch Nails, Metallica, etc.

I like well-made movies from most genres and often try to experiment with new stuff. Particularly like thrillers, sci-fi and horror movies. Some of my favorite movies include Fight Club, Eternal Sunshine of the Spotless Mind, Ex Machina, Donnie Darko, 1408 etc.

Haven't read much lately (other than academic stuff).

Did a road trip through the national parks of Utah for a week at a time when I had just learnt driving, and this was the first time I ever drove without someone sitting by me! It felt crazy in the moment as I had never even driven on highways before and now I was going through hundreds of miles and sleeping in the car at nights. Had wonderful views of the night sky when camping outside in Utah.

I can teach as well as learn cooking. I mostly cook Indian food but always want to learn more. Can teach some technical stuff such as math, from the perspective of someone doing it for their career. Can also share a lot of good music suggestions and discuss about music in general.