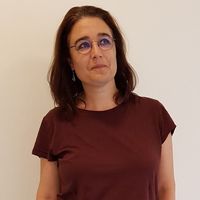 Happy to offer what I am able to :-). I'm vegan and like cooking a lot, so, if you want to, we can cook and eat together. If not, there's a lot of restaurants around here. Other interests: urban gardening, films and series, philosophical talks, laughing, keeping it as real as ever possible.

I would like to find more flexibility: Meet new people, have the possibility to stay elsewhere without too much of a financial effort. I do like the thought that basically, people are friendly and nice.
That's why couchsurfing goes well with me :-).

Music: Nena, Shawn Mendes, Indian Film Music, Musical music like Moulin Rouge. It's a lot of Kitsch I know, but what can I do if I like it?
Films: I like films from all over the world. I don't mind mainstream movies from the U.S., but they have too much influence I think. One of the last films I saw was "Size doesn't matter - Ask Dr. Ruth". Very refreshing. Then, the current series is "Velvet". Spanish and very fashionable.
Books: The last one is called "Can I have the skin color" which tells how to teach humanity to children in our racist world.

Teach: Languages.
Learn: I learn every day a little more - I'm sure also from you!
Share: I like sharing

Food, thoughts and what there is (to be discovered ;-))