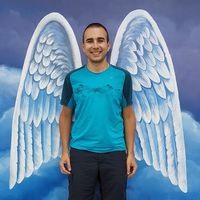 CURRENT MISSION
“Please be a traveler, not a tourist. Try new things, meet new people, and look beyond what’s right in front of you. Those are the keys to understanding this amazing world we live in.” - Andrew Zimmern

ABOUT ME
Who am I? That is a simple question, yet it is one without a simple answer. I am many things - and I am one thing. But I am not a thing that is just lying around somewhere, like a pen, or a toaster, or a housewife. That is for sure. I am much more than that. I am a living, breathing thing, a thing that can draw with a pen and toast with a toaster and chat with a housewife, who is sitting on a couch eating toast. And still, I am much more. I am a human being.
If you want to know much more, write me. :-)

PHILOSOPHY
1. Travelling will change your mindset towards things; it will help you see the world and others differently.
2. It will help you embrace the unknown and just go with the flow; to take things as they come, and not be afraid of the unknown.
3. It will teach you that it is OK sometimes to not have a plan. It's OK to do what you feel like for once.
4. It will teach you things that you will never find in your academic books. It will push you towards realities of the world, the way they are. It will teach you to get out of the box and expand your horizons.
5. It will make you humble. It will take you out of your comfort zone and help you experience things in a whole new way.
6. Travelling might just change your life.
7. It will give you a lifetime of stories. You might realise the purpose of your life while doing something mundane like sipping tea, or you may not, but you will still return richer and wiser.
8. Travelling will help you connect with fellow citizens, who might become your friends for life. You will learn about their language, their culture, their world, and their strife.
9. It will open you up to different kinds of foods, drinks, and places. Can you imagine the magical charm of learning about something new?
10. It will teach you that you should never just "settle", never compromise, and that you should go after your dreams. Stop getting stuck in a rut, rather make up your mind, pack your bags, and move on. Go for a change.
11. Travelling makes you appreciate little moments, makes you see things in a new light.
12. While on the road, you might just get drunk one night and wake up someplace else, which is fine, because that's a new experience too.
13. Travelling will help you see that there's more to things than meets the eye. It will show you how ignorant you have been, caught up in your own little world. It will help you grow as a person, become someone new, someone better.
14. Don't think of travelling as a waste of time. You can always earn money, always work in an office, always wear suits and ties and fancy shoes, but none of it will add anything to your life like travelling can.
15. Money comes and goes, but don't miss out on an opportunity to get on a plane and go someplace new.
16. Don't wait too long to travel. Don't think you will go see the world when you are 50, settled and happily married with kids. You might not feel like it then, you might be too busy, you might have other commitments, or you might not even be alive. Travel now.
17. Forget your responsibilities for a while and take the plunge.

See you at an airport with a boarding pass and a backpack soon!

I get along very well with new foreign people. I used to be the leader of ESN (Erasmus Student Network) in Zlin, a student organization where we organize trips, events and other programmes for international students coming to Zlin. It is a fantastic activity where I can make friends for life, gain courage for travelling or just have a good time with international students, making their days in Zlin more interesting and happier.