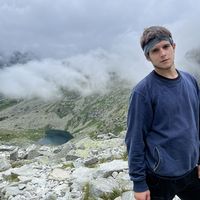 I was living in China from 2016 to 2017. I was about to move back there in 2020 when all this virus thing started and they close the country to foreigners. So I finally decided to moved to Prague and work here until I have the chance of going back there. :)

I used to play guitar and sing with a band when I was a teenager.

I was once in Tenerife and while walking beside the seaside it suddenly came to an end with a rock wall, instead of going back I decided to climb the huge cliff and just continue with my walk. While climbing up a rock I was handling suddenly fell down and I almost go all the way down with it to the water/rocks. I don’t know how, but I did it to the top. I was so happy that I decided to climb the Teide that same night as well. I’m not usually a sport person, but I got to the top just on time to see the sun rising :D That really was a great feeling.

Since then I dream about climbing other and higher mountains.

I could teach you some guitar, but actually I’m not very good at it, I could also teach you some Chinese, but it’s a similar situation… let me think…

We can always prepare an Spanish omelette together!