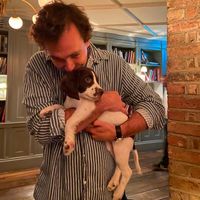 To couchsurf the world in my twenties!

Hey, I'm Jack and I am an inveterate traveller who really loves the ethos of Couchsurfing.

I have hosted and couchsurfed in several European countries along with the USA, Canada, Australia and New Zealand. I have been extraordinarily lucky to meet some marvellous people through this project and I hope to meet many more great people through events and trips in the years to come!

I have a special affinity with Italy, in which I have travelled extensively. I am currently working on a book about Italian history.

Among my favourite places that I've visited on my Couchsurfing travels;

Next places on the wish list are Austria, Chile and Russia!

"Don't judge each day by the harvest you reap but by the seeds that you plant." Robert-Louis Stevenson

I have been so lucky with Couchsurfing - I feel like it's an amazing gateway to get past the mundane predictability of travelling through a place. For me, when you meet the people, that's when the real memories start to happen. I have travelled extensively with Couchsurfing in Western Europe and parts of Australia, I have slept on floors, in sumptuous beds and on many a different couch, all worth the vivid experience. On almost 50 occasions, I've almost never had a bad experience. With each time I have met extraordinarily kind, generous and witty hosts and made many a good friend, so it really puts your faith back into humankind. I have hosted in York in the past and hope to be able to do so again in the future, wherever that may be.

I am very much into European art and literature from between 1900 and 1920, especially Italian, Swiss and Austrian art. I also love cross-country running, boxing and swimming. Although I am committed to study for subsequent years, I get away to travel as often as I can and to enjoy the beauty of our marvellous European continent.

'Without music, life would be a mistake', Nietzsche

Music is incredibly important to me and I discover so much of it through my favourite weekly broadcast, Gilles Peterson's worldwide show, on BBC 6 Music. He has introduced me to so many great artists like Hiatus Kaiyote, BadBadNotGood, Marcos Valle, King Krule and Romare. Other favourites are Incubus, Jesca Hoop and The Last Shadow Puppets, among innumerable other artists! I have also started discovering Italian folk musicians like Fabrizio de André and popular Brazilian bands such as Novos Baianos and Os Mutantes.

Among my favourite classical composers are Ravel, Debussy and Strauss, in whom find great inspiration.

I collect a lot of literature and travel books; I probably have too many books, but I don't care because they give me understanding, memory and inspiration.

I really like European films and some of my favourite film directors are Alexander Payne, Luchino Visconti, Ray Lawrence, Eric Rohmer and Michael Haneke.

Slept under the stars in Kakadu National Park in Australia :D

I am happy to teach anyone English and I would love to share my experiences with like-minded people who wish to reciprocate, especially those who like art, architecture and philosophy. I always like to try and communicate in the host's language wherever possible, especially Italian!

I am courteous, punctual and always gracious of having the privilege to stay with another CS host. And, most importantly, I love to chat about all my various travels, past, present and future.