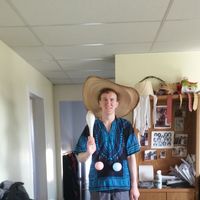 I am 18, I'm from Canada and I love to travel! With my family I have travelled to Cuba, Mexico, the Dominican Republic, Hong Kong, Australia, and the United States. Last year I lived in Australia for five months, and now I am doing my first big trip overseas to Europe. I am now closing in on my 5th month of travelling Europe and the UK and loving it!

The reason that I'm on Couchsurfing is so that I can stay with some lovely local people in some of the countries that I visit during my travels. I'd also really like to learn about the history and culture of the countries and usually you just don't get that with a hostel. Also some hosts are willing to show people around and I find that is a wonderful thing. It's always more rewarding to be shown around by someone who really wants to show off their city or country than by someone who is just doing it as part of a job. Apart from just surfing, I have just recently switched to accepting guests in order to repay some of the amazing kindness that I have received from hosts! And also to show off my home province of Saskatchewan if anyone is brave/silly enough to come and visit.

Some of my main interests:
I really enjoy juggling and now I am also using the diabolo. I don't perform on the streets as of yet, but one day I'd like to. I'm really into hiking these days, especially because back home I don't get very many chances to hike since Saskatchewan is probably one of the flattest provinces in Canada. Occasionally I like to go out, although I prefer some drinks at a bar maybe playing pool over night clubs. If I have a chance I also really enjoy reading and watching movies.

Music: I have a pretty eclectic taste in music. There isn't really a whole lot that I wouldn't listen to. Some bands that I enjoy are:Foo fighters,U2,MGMT,KiD CuDi,Electric light orchestra,Of Monsters and Men,Lorde,Twenty one pilots,Flume,Walk off the earth,Led zeppelin,Macklemore,Thornley,Nirvana,2pac,three days grace,cage the elephant, the black keys and the list goes on. My favorite Canadian bands at the moment are probably big wreck/thornley and Walk off the earth. If you haven't heard of them, check them out. I don't think you will be disappointed. My favorite band of all time is the beatles.

Books:This list could go on forever as well so I will just list a few of my favorite authors.
Brian Jacques
Christopher Paolini
C.S. Lewis
Tolkien
J.K Rowling
Phillip Pullman

Movies:Iron man, Avengers, into the wild, spirited away, howl's moving castle, Die hard, Lord of the rings, harry potter, dragonheart, braveheart, hachi, red dog, marley and me, Avatar, Robin hood, Star trek, Dances with wolves, James bond, Me earl and the dying girl, Sherlock holmes, pacific rim, hellboy, van helsing, batman, the matrix, Leon, indiana jones, intouchables, terminator, the departed, gladiator, the lion king, django, up, the wolf of wall street and gran torino. Also Game of thrones. I know it's not a movie but I couldn't leave it out.

Climbed a mountain to the summit at 2800 meters. Hopefully one day it will be even higher!

In terms of teaching things to guests or hosts, I think juggling would probably be the main thing that I could offer if you are interested. I could also try and teach you some french although my french isn't as good as it once was. I'd love to learn pretty much anything. And with hosts hopefully I can share some interesting travel stories and a positive attitude. With guests I can share a room in my home, as well as my knowledge of Saskatchewan. Although to be honest if you do visit me, I will probably try and take you outside of Saskatchewan, maybe to the Rockies.

With hosts I can share my knowledge and experiences of Canada although I have only been to four of the provinces. My main knowledge is of my home province of Saskatchewan, so hopefully I don't bore you to death. Apart from that, the main thing that I can offer is a positive attitude and hopefully some interesting travel stories. I can also lend an ear, as I love to listen to other people's stories and hear about their adventures and home country. I could also maybe try and cook for you, but you might end up with only bacon and eggs on toast so you might not want to take me up on that offer.